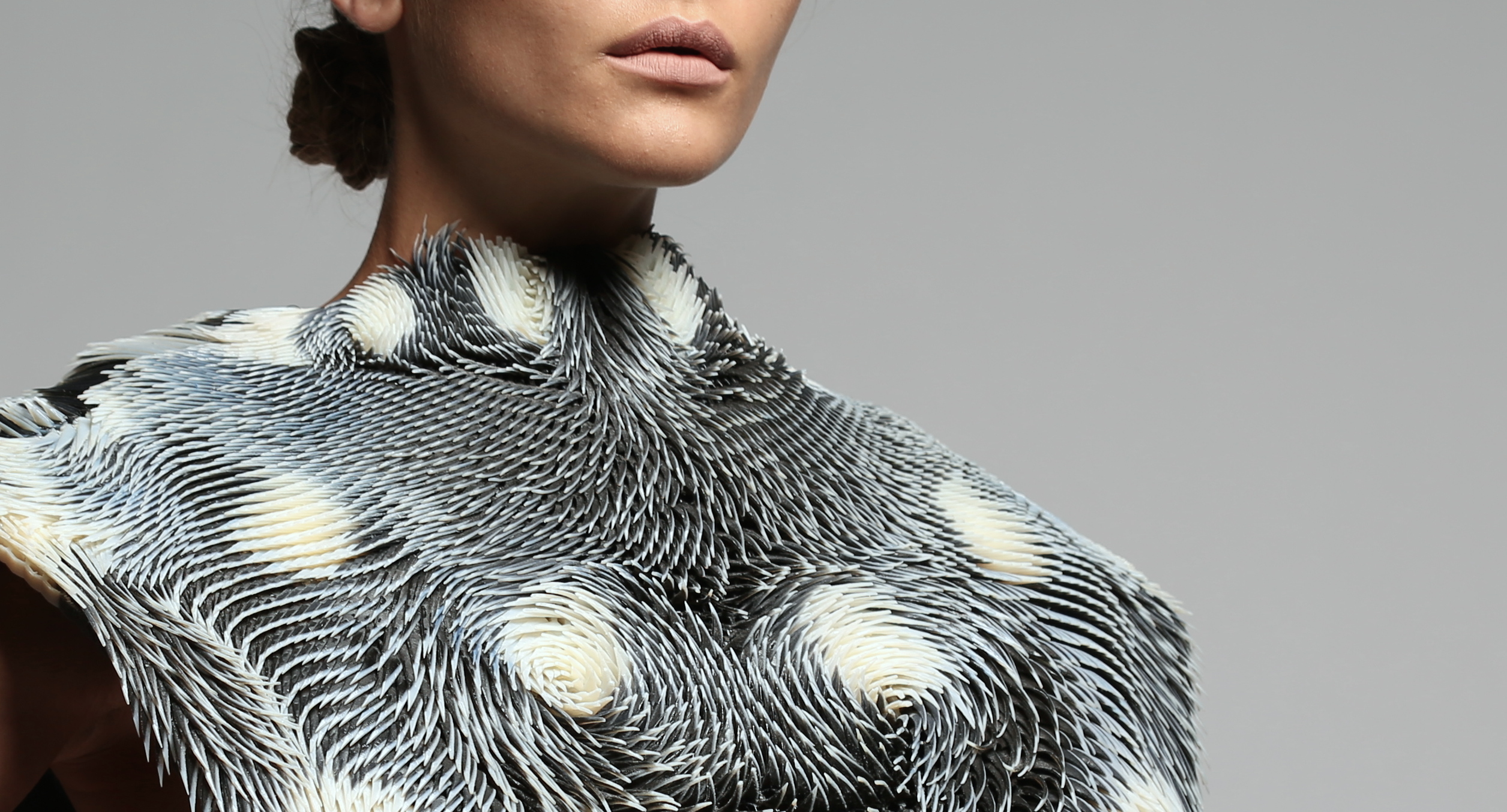 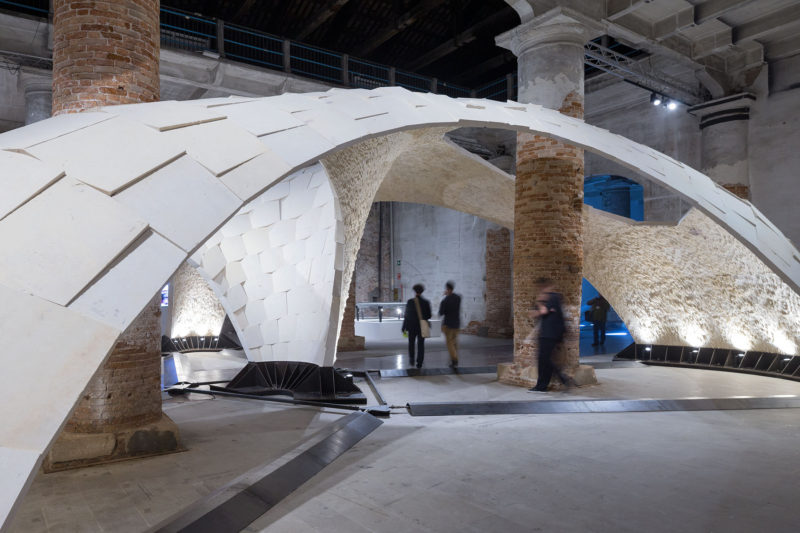 Robert J. Lang has been an avid student of origami for over fifty years and is now recognized as one of the world’s leading masters of the art, with over 700 designs catalogued and diagrammed. He is noted for designs of great detail and realism, and includes in his repertoire some of the most complex origami designs ever created. His work combines aspects of the Western school of mathematical origami design with the Eastern emphasis upon line and form to yield models that are at once distinctive, elegant, and challenging to fold. They have been shown in exhibitions in New York (Museum of Modern Art), Paris (Carrousel du Louvre), Salem (Peabody Essex Museum), San Diego (Mingei Museum of World Folk Art), and Kaga, Japan (Nippon Museum Of Origami), among others.

Behnaz Farahi is a designer and creative technologist based in Los Angeles working at the intersection of fashion, architecture and interaction design. Trained as an architect and specializing in 3D printing and physical computing, her ultimate goal is to enhance the relationship between human beings and their environment by following morphological and behavioral principles inspired by natural systems. Behnaz is a recipient of a number of prestigious awards including the 2016 World Technology Design Award and the 2016 Innovation By Design Fast Company Design Award. Her work has been featured on various television channels, including the BBC and CNN, and in leading journals and newspapers, such as Wired and The Guardian. She is currently an Annenberg Fellow and is completing her PhD in Interdisciplinary Media Arts and Practice at the USC School of Cinematic Arts.

Philippe Block is a Professor at the Institute of Technology in Architecture at ETH Zürich, where he directs the Block Research Group (BRG) together with Dr. Tom Van Mele. The BRG focuses on equilibrium analysis, computational form finding, optimization and fabrication of curved surface structures, specializing in unreinforced masonry vaults and thin concrete shells. Prof. Block is also the director of the Swiss National Centre of Competence in Research (NCCR) Digital Fabrication. Within the NCCR, the BRG develops innovative structural design strategies using bespoke prefabrication, pushing construction innovation.

Block studied architecture and structural engineering at the VUB in Belgium, and at MIT in the USA, where he earned his PhD in 2009. With the BRG and as partner of Ochsendorf DeJong & Block (ODB Engineering), he applies his research into practice on the structural assessment of historic monuments and the design and engineering of novel compression structures. He has won numerous awards for his research, has lectured at top universities and leading engineering and architecture offices worldwide, and is regularly invited as an expert consultant.

Thomas Speck studied biology at the University of Freiburg (PhD 1990) and received 1996 the venia legendi for botany & biophysics. After a visiting professorship at the University of Vienna he was offered professorships at the Humboldt-University in Berlin and at the University of Freiburg where he acted from 2002 until 2006 associate professor for ‘Botany’ and director of the Botanic Garden. After declining the offer of a full professorship and the directorship in general of the Botanic Garden at the Freie University Berlin he became in 2006 full professor for ‘Botany: Functional Morphology and Biomimetics’.
He is spokesperson of the Competence Network Biomimetics, vice-president of BIOKON international, vice-chair of the Society for Technical Biology and Bionics, and board member of the Biomechanics Group of the Society for Experimental Biology, U.K. Thomas Speck is deputy director of the Freiburg Center for Interactive Materials and Bio-Inspired Technologies (FIT), scientific member of the Materials Research Centre Freiburg (FMF) and co-spokesperson of the CRC 141 „Biological Design and Integrative Structures – Analysis, Simulation and Implementation in Architecture”.
He received several scientific awards, is (co-)editor of several scientific books and journals and has published more than 250 scientific articles in peer reviewed Journals & Books in the fields of functional morphology, biomechanics, biomimetics, evolutionary biology and palaeobotany.

Jan Knippers studied civil engineering at the Technical University in Berlin. After several years in an international operating consultancy he founded Knippers Helbig Advanced Engineering in Stuttgart (2001) and New York (2009) with Thorsten Helbig. In parallel he is professor and head of the Institute for Building Structures and Structural Design (ITKE) at the faculty for architecture and urban design at the University of Stuttgart. In practice, research and teaching he focuses on highly efficient building structures and use of innovative building materials. Since recently, Jan Knippers also became spokesperson of the new SFB-TRR 141: Biological Design and Integrative Structures and is part of the European innochain network.

With a broad range of interests which include bio-nano surfaces, smart materials, crystal engineering and biooptics, Professor Aizenberg is the recipient of many awards and in 2015 received Harvard’s most prestigious Ledlie Prize that is awarded for the most valuable contribution to science made by a Harvard Scientist. She is the Director of the Kavli Institute for Bionano Science and Technology and Platform Leader in the Wyss Institute for Bioinspired Engineering at Harvard University. She has served at the Board of Directors of the Materials Research Society and at the Board on Physics and Astronomy of the National Academies. She served on the Advisory Board of Langmuir and Chemistry of Materials, on Board of Reviewing Editors of Science Magazine, and is an Editorial Board Member of Advanced Materials. Professor Aizenberg is also a Fellow of the American Academy of Arts and Sciences, the Materials Research Society and the American Physical Society.

Jessica and Jesse will discuss Nervous System’s unique approach to product design through generative techniques, 3d-printing and interactivity. Along the way, they will take several detours into the realms of natural pattern formation, simulation, and biology. The talk will focus on some of Nervous System’s latest projects including a 4D printing technique that creates complex, foldable forms for 3D printing and an exploration into the morphogenesis of plants. Nervous System was founded in 2007 by Jessica Rosenkrantz and Jesse Louis-Rosenberg. Jessica currently acts as Creative Director and Jesse as Chief Science Officer. Together they lead a team of four. Jessica Rosenkrantz graduated from MIT in 2005 and holds degrees in Architecture and Biology. Afterwards, she studied architecture at the Harvard Graduate School of Design. Jesse Louis-Rosenberg also attended MIT, majoring in Mathematics. He previously worked as a consultant for Gehry Technologies in building modeling and design automation. (watch the lecture)